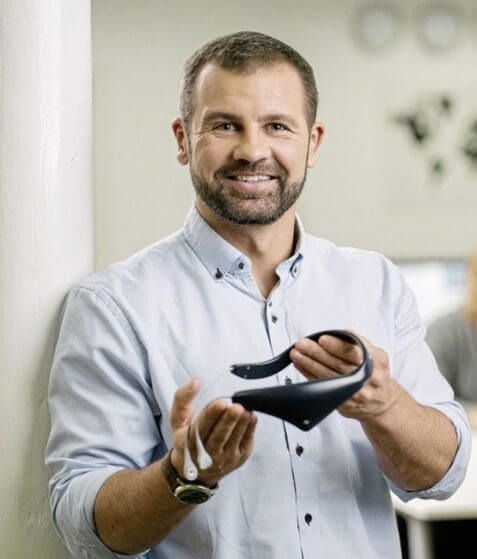 Dr. Jason McKeown is the CEO & Founder of Neurovalens, a health-tech startup that creates non-invasive tech wearable devices (based on neuroscience research) that help improve the lives of those who suffer from neurological issues, such as obesity and insomnia. Dr. Jason McKeown is a UK trained medical physician with an interest in the neurological aspect of obesity, diabetes and metabolism.

How did you get started?

I’ve always been really interested in electronics; I consider myself self-taught to some degree. By age 13 I was making and sending custom built computers out all across the world from my bedroom. Funnily enough, in my late teens, my parents had an important conversation with me, asking me to really think about if I really wanted to build a career in electronics or take a more traditional path via university. They said: “There’s no future in computers, because everyone’s got one!” So I decided to study medicine as I thought that would be both a strong career move and a gateway into exploring the most advanced electronic device in existence – the human brain and nervous system!

“There’s no future in computers, because everyone’s got one!”

I trained to be a doctor at Queen’s University in Belfast and it was working in neurosurgery in Edinburgh that I met my co-founder Paul, who had just finished his PhD thesis at the University of California, San Diego. Paul was curious to design a non-invasive electronic device that could be used to stimulate different parts of the brain. He started asking me about schematics and electronics. And it was just coincidental that I knew about all this stuff. Eventually we realized that we were doing a better job together than the ‘specialists’ who were advising him on the matter, and we decided to do this ourselves.

How did you make the jump from academia to setting up Neurovalens?

I set up Neurovalens and registered the company in Belfast, as there’s a lot of early investment support in the Northern Irish ecosystem. Not long afterwards, I was invited to become a Visiting Scholar at The Center for Brain & Cognition, a world leading neuroscience centre within the University of California, San Diego. I am actually the youngest person who has ever been invited to take that academic position. I found that medicine in the UK was very iterative. It was easy to get bogged down in this idea that success is only measured by how many papers you have published. But it doesn’t work like that at the Center for Brain & Cognition, they’re really interested in innovation and creating big changes in health that lead to significantly improved patients’ lives. So that’s why they were interested in what we were doing.

The problem I faced at the very beginning was this was all self-funded. In order to pay Neurovalens’ bills I had to continue working in A&E, doing countless nightshifts and weekends. So, there was literally a period of several years where I simultaneously worked for Neurovalens, worked as an Emergency Medicine doctor and also flew to California to work in the lab at UCSD. It was extremely hard work but thankfully it’s been worth it.

“In order to fund Neurovalens I had to continue working in A&E on the weekends, simultaneously setting up Neurovalens Monday to Friday.”

What is your vision for Neurovalens?

What we are really good at is non-invasively stimulating the brainstem & hypothalamus. The brainstem and hypothalamus are intersections between your brain and your body. It controls pretty much all of the bodily functions you don’t need to think about, but you need to survive, such as the beating of your heart, your blood pressure and so on. A good way to picture the brainstem is to imagine a control room that monitors and regulates everything within the body. So, if you can influence the brainstem & hypothalamus, you can influence many things within the body, like sleeping patterns, appetite, even arthritis, Crohn’s disease, etc.

The vision of the company is to connect the technology which can influence the brainstem & hypothalamus in a non-invasive way to cure or treat neurological diseases. We’re very interested in four areas: diabetes, obesity, insomnia and anxiety. That’s tackling chronic, mental and physical illnesses, in a drug-free way.

How has IQ helped on your vision and progress?

Our experience with IQ Capital has been extremely positive. The one big thing that has separated IQ from the pack is their focus on the big picture. Even in the initial discussions we talked about what the product is going to look like in the end and how we get there, rather than incremental stages of growth. When you are working to short term goals it is sometimes you lose sight of the big vision but the IQ team said ‘This could be massive. Let’s make it happen,’ which was really exciting and refreshing.

“Sometimes you lose sight of the big vision. The IQ Capital team said ‘This could be massive. Let’s make it happen.’ That’s really exciting and refreshing.”

Any advice for founders taking VC capital? What was your experience in the last 2-3 years?

Belfast has a good ecosystem from a seed funding point of view, which is positive for people wanting to launch innovative tech. However, the next stage is trickier because you want to expand outside of Belfast. My advice to other teams looking for VC funding is to start early. Also to build relationships by explaining your vision, rather than knocking on doors saying: ‘hey we need money and we think we’re good’.

“My advice to other teams looking for VC funding is to start early. Also to build relationships by explaining your vision, rather than knocking on doors saying: ‘hey we need money and we think we’re good’.”

In a tech development stage, was there a point when you realised that your product actually works and can have a significant impact on people’s lives?

Yes! However, it wasn’t the actual tech that provided the “eureka moment” and this is sometimes hard to convey to people. The best analogy I can give is this: when NASA put astronauts into a rocket bound for the moon they already knew it worked and that they could do it because the science and the maths were already there. So, they could see something that no one else could see until they had physically done it. When we started looking at the neuroanatomy and the ‘schematics’ of how the brainstem influences the body, we had a bit of a moment “we know for sure that we can do this!”

When building a team, what advice would you give about hiring?

Hire for where you want to go, versus hiring for the position you’re currently looking to fill. Set a target and bring someone that can achieve that target. We are really protective about our work culture – we’re pretty small team but everybody is a high-performer. To maintain that, you need to spend a little time fostering the culture and that people feel proud to be a part of that team. It’s also about the little things that people think are insignificant: from the décor in the office, to shelves and storage spaces. I personally put effort into that work, which I think 90 percent of people would not even notice, but I think is really significant. I always remember the Futurama quote where it says, ‘When you do things right, people won’t be sure you’ve done anything at all’.

“Hire for where you want to go, versus hiring for the position you’re currently looking to fill.”

What’s next for the company and how do you measure success?

In our industry, success is measured through regulatory approvals – which take up 90 percent of my time. We are going for FDA approval first, then EU approval. We are already at Phase 3 of our trials for obesity, and we aim to have approval for an insomnia device and an anxiety device inside the next 12 months. In 2021, we’ll be looking at Phase 3 for diabetes. While it is hard work, approval on a medical device is actually fast compared to drug trials.

How do you relax and keep sane as a founder building a start-up?

I love learning new things and I love travelling. Thankfully, my wife Patricia has the same mentality so although a very hectic lifestyle, we both really enjoy it and wouldn’t want to change anything. Last year, I got my motorbike license and I’m currently working on getting my helicopter license. I’m also trying to learn Chinese. One good thing about my position at the University of California is that it gives Patricia and me fairly regular opportunities to explore the Californian deserts and national parks whilst camping and hiking. I find that getting away for a while really gives me space to think about the next steps for the vision of Neurovalens.

"The benefit of having IQ Capital as part of the team extends well beyond providing funding. I am extremely grateful for the sense of ambition and passion that IQ Capital see in the future of Neurovalens. If you have an exciting idea and are ready to move fast, then I would highly recommend reaching out the IQ team and finding out more about how they can help your company succeed."